Well, when you see the picture of the “thing” that my friend Simone brought over yesterday afternoon, an exclamation is in order! He had a paper bag in his hand. He said it was a gift from his mother. Nothing I knew about mushroom prepared me for the sight.

Here it is in a pic taken earlier by Pia: 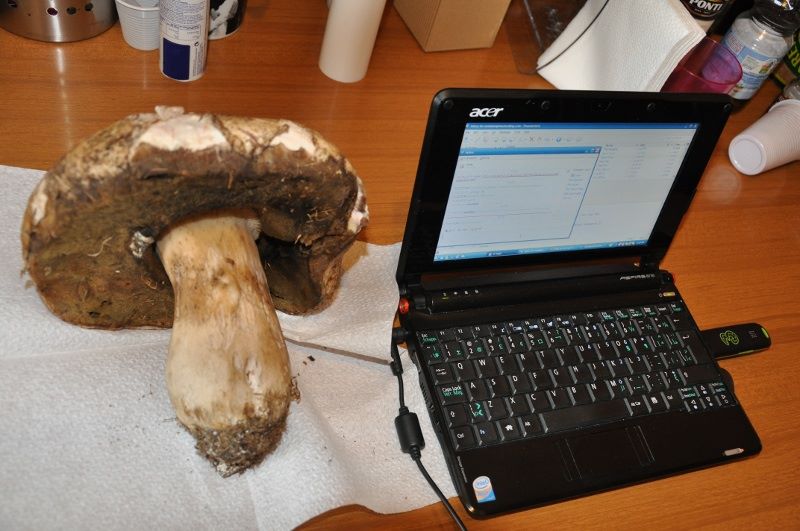 Later that night we prepared the huge mushroom to Simone’s mother’s recipe (thanks!) with some garlic, olive oil, salt and a squeeze of lemon, oh and a steak! DELICIOUS!

Step into my office

Anyone who’s ever worked from home will tell you it’s hard to stay focused with too many distractions all around. Having no children, the only distractions at home for me would be the cat. But we have both learned to respect each other’s space and daily habits, so there’s no problem for me there.

Now, I thought this would change once we came to Italy. I had a goal to work in public places at least once a week since we came here. I have managed to do that a couple of times so far.

The key was being well prepared. I have a couple of extra batteries for the netbook I use (Acer Aspire One). The larger one (12cell chinese made) will stay up for about 7 hours without wifi. With the UMTS/broadband USB key however, I found it will stay up for about 4 hours. The other batteries keep me up for the rest of my 8 hours work day, so I’m covered there.

The other thing to look for is a good place to sit and be comfortable while trying to concentrate on troubleshooting server problems 🙂
I tried doing that at the pitti palace gardens (boboli gardens) last month, but it was too hot to bare. I had to go find another place to work as mosquitoes and other annoying things were eating me up in the heat. The solution then was a nice busy restaurant with good air-conditioning and friendly staff.

The best time I had so far working in public places was at the Piazza della Signoria. The main attraction for tourists in Florence. It’s where you find the free open-air meuseum, the Palazo Vecchio (with the fake David up front) and right around the corner from the Uffizi Gallery.

I found a nice spot under one of the historical statues (not the one with the warrior holding high the severed head of an ennemy). There was a street musician playing guitar (same tunes over and over). And there was a nice cool breeze all day. I completely phased out of my surroundings as I started to work, up until the time when Pia came back from her self-made tour at the Bargello.

I hope I can do that again sometime. Maybe with the nicer weather I could find other interesting places to work at. It’s so nice to work from home, but troubleshooting Linux server issues at a museum is a dream come true!

On our way to Venezia

It’s been a hecktic week since the Assembly ended. I’m writing this post on the train going to Venezia. We should be there soon, maybe I won’t have to jump off the train this time 🙂 [Last time we were here, two years ago, we almost missed the stop at Venice Mestre station. We got off the train at the last minute before it took off to the Venice Santa Lucia station, and I literally jumped off the train after it started moving!]

On Monday we were still in Roma, we were too tired to do anything, so we decided to stay with our friends (the De Cata family). Pia told them early on she would cook something Lebanese for them so she did just that. For the ingredients, Giulia (the daughter) took us by car to the nearest Supermercato (yeap, a supermarket). She was babysitting that day, so we took the young Alessia with us as well. Alessia is a 2 years old daughter of the columbian neighbors of the De Cata family. The girl is like the Energizer bunny, she just won’t stop moving. But she sat still in the car, and snuggled up to me when I asked her to sit still until we reached the supermarket. In the supermarket, she wanted to eat something. Giulia got her a chips bag that she finished to the last crumb! I never saw a kid that age eat the whole thing!
At the house, Pia and I made some Mjaddara (lentils and rice Lebanese dish) and then decided to make some Tawook as well. It turns out that the Romans don’t have anything to sqash the garlic with. I (the sous-chef) used a beat up electric blender to mix and mince some of the garlic cloves, then I mixed them with some mayonaise from the tube. (They buy it in tubes instead of jars because the fridge is not that good and mayo goes bad quickly).
Leo and Stefania were back noonish and were very impressed with the result! We were happy they liked it. The time we spent with them was truly enjoyable. Both parents were full time pioneers at one time, and the daughter and father will be starting regular pioneering this September again.
In the afternoon we went down to Roma Termini (train station) to get our tickets to Florence. We met up with our siblings in Rome near the Tiber, but went back quickly to the house to sleep early. At the De Cata’s we took some photos, and said our goodbyes, since we wouldn’t see them again in the morning.

The trip to Firenze (Florence) would have been uneventful, but Ghassan was stranded on the Fumicino train (from Airport) so we had to leave without him! He followed on a later train. We arrived noonish at Firenze S.M.N. (train station) and Simone (the friend we met in Roma) was waiting for us in his car! What a wonderful brotherhood we have!
Simone took our siblings’ bags to the hotel while we checked them in. Matia and Hanan were moved to another (better!?) hotel in the same street. Giuliano (Juliano) and Ghassan later took a room in another hotel (that had internet connectivity). Simone then took us to get the key to our house, drove us to the house and showed us around, then took us back to the center to eat at a “Lebanese” restaurant. We were not impressed with the quality of the food, but Simone sure liked it! He should taste Pia’s cooking for a change 🙂
We spent the rest of the day touring the center of Firenze. There’s a lot to see there. We saw the Duomo, Ponte Vecchio, Piazza Di Sinioria. We also met many of the Lebanese delegates to the Roma International Convention. Later that evening we met at Zaza’s in the old marketplace. The food was good, and we had some of their house wine. I ate a wonderful dish of spaghetti and small mussels, Pia had a steak with truffle sauce. We both enjoyed it, even thought the service was a bit lacking, probably because we got stuck with a lazy waiter.
That night we tried for the first time to get home on our own, and that was … a mistake!

The next day in Firenze, we woke up a bit late. Noonish, we took off for Pisa. It was a nice trip, but I have to get off the train now. We almost missed Mestre station (again!)

Arrived there at 7:00AM – spent 1:45 between the huge crowd that was there. Most of the people simply passing thru Milan, as it is the cheapest airport this time of the year.

Arrived at Stazione Centrale (downtown Milan) at 9:30 – We took the shuttle from outside the Airport6EUR/person [ Malpensa Express ]

We’ve been married for 2 months, and were both looking forward to this trip 🙂

Our agent, Amin, had proposed a list of places to go and things to see. He also made arrangements for all our hotel and train/plane tickets. So most of the trip was layed out before hand.

We really enjoyed it. Every part of it. And we’ll be posting some of the details of the time we spent in Italy in this blog under the Italian Holiday category. So stay tuned, you might find interesting stuff + some pointers for your own holidays!